For the Duchy of Milan, the first three decades of the XVII century had been a hard period of military campaigns, which plague and famine made even more dramatic.

After the King of France and the King of Spain stipulated the Treaty of the Pyrenees in 1659, Lombardy had a more stable and serene political context. However, the wounds of a thirty-years long war were still open and the economy was put out as well as overflowing with poverty and misery.

In the second half of the XVII century, due to the war expenses that exhausted public budgets, the Spanish monarchy promoted a massive sale of public properties in Lombardy with the exception of the main cities and border areas. Moreover, rich families dwelling in the region had the possibility to purchase auctioned feuds. This means that they could also take the highest and most lucrative offices of the duchy thanks to the titles that they acquired with the estates.

Under the Spanish domination, the situation in Varese was not particularly dissimilar from the previous centuries. For instance, as a commercial town, it had not been deeply affected by the deprivations and calamities of the war. Moreover, the hegemony of the patrician families and clerical power kept the local political equilibrium unaltered.

The County of Varese had nothing to worry about. In fact, according to a decree that Emperor Charles V issued in 1621, Varese and the surroundings had been enfranchised from the constant efforts of subjugation.

Yet, the critically disastrous financial condition of the duchy imposed radical actions. When Emperor Philip IV succeeded Charles V at the throne, he had to face and solve the collapse of public finances as soon as possible. Therefore, he required the Spanish governor of Milan to provide him a detailed report on the State properties in Lombardy including those in Varese. Thus, by sovereign decision, the County of Varese was going to share the same faith as other areas in Lombardy; it was going to be sold to the highest bidder. In 1646, Count Cesare Visconti di Cislago offered to buy it. [1]

Interestingly, as the citizens in Varese believed that Charles V made their autonomy ironclad thanks to the enfranchisement decree, the Council of the leaders was urgently called in. Regardless his participation in the meeting, there is no record of the role that Gian Pietro Perabò played in the controversy. Nonetheless, in the following year, 1647, the Spanish government accepted the arguments of the Council of the leaders and subsequently in 1651 it recognized the County of Varese full autonomy as formalized by Emperor Charles V, in 1621. [2]

The Perabòs expanded from San Rocco neighbourhood, their traditional abode, few family households emigrated to other companies in Varese, and many moved to the surrounding county.

In early 1600, Enrico Perabò became the new canon of San Vittore Cathedral, and he was a fourth-degree descendant of Orricolo. According to Antoniolo Perabò’s will of 1397, in 1651, he ordered that the day after Saint Mary Magdalene’s day on July the 23rd, the poor was given as many breads as they could bake with “an Italian sextary of grain and two bushels of blend.” People enjoyed his generous act, and town authorities thought well of it. As usual, such benevolence to the indigent increased the prestige of the Perabò lineage. On that festive day, a bell ringing in the Saint’s chapel in San Vittore would gather poor people to the front door of the cathedral. [3]

Those, who had the ‘signs,’ were given bread by the most virtuous members of the family at the presence of the head of the chaplaincy. This form of charitable initiative became a recurring event, and it was remembered as “the Perabò’s bread.” [4] 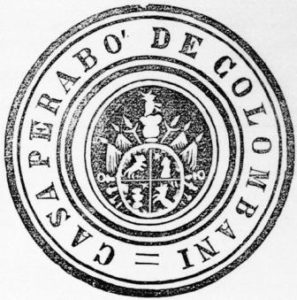 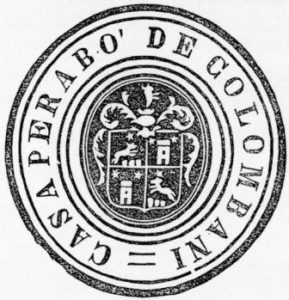 The inscriptions with the symbols of the Perabò-Colombani’s army

Teodoro Perabò, unwed and invalid, had quite a singular life. He lived in his father’s home, since his father’s holdings had not been divided yet. In poor health and in constant contrast with his sister-in-law, he asked to be given a place at the Hospital Of The Poor where “he could retire and receive the papal indulgence, which is usually given to those, who decide to die in a hospital and leave all their properties to that same place”. [5] 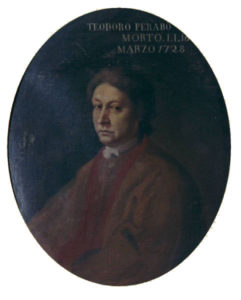 His wish was granted. Upon his death, his belongings were given to the hospital and a share of his capital was given to the Perabò patronage. After Teodoro was nominated “benefactor of the hospital,” [6] the Perabòs demonstrated that they cared about hospital, which was always in need of substantial handouts to improve the quality of the service.

Varese in the XVII century – The Companies 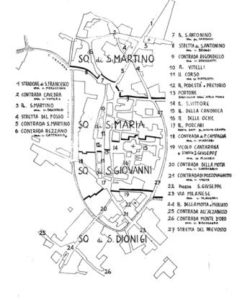 “… ‘Company’ was a term used to indicate a group of censused residents, householders ‘capita domuum’ as well as free men, who had to pay tributes, who were born in town, and who had an actual address in it. Therefore, birth and census were fundamental for its constitution… “

The ‘companies’ were six:

Saint Martin, the Northern neighbourhood of the town, including Castellanza di Giubiano;