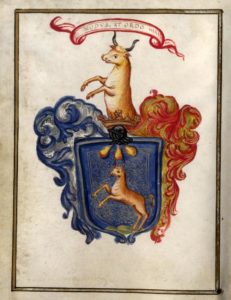 On the account of the decree of March 7, 1791, the Austrian Imperial Government (AIG) recognized the long-time benevolent peerage of the Perabo lineage to Don Giuseppe and Abbot Gio Battista, children of the distinguished and honourable Gabrio de Perabo, town clerk of the city of Milan.

Such an aristocratic recognition originated from the resolution motu proprio, through which in 1630, after taking cognizance of the family long-time patriciate, Emperor Ferdinand II granted Bernardo Perabo the right to engrave his weapon in the coat of arms of Sir Camillo De Colombani, who had become his son-in-law.

Since they had no reason to reject it, the AIG extended the titled status ad abundatiam to any secondary family branches, by acknowledging the privilege that Empress Maria Theresa granted to Don Gabrio Perabo in 1755, although his progeny died out in the meanwhile. 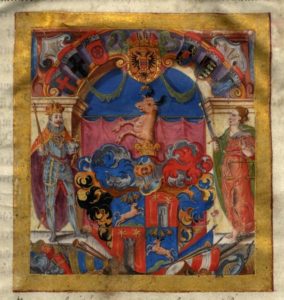 According to the heraldic documents issued in 1791 and cited in the Italian Heraldry Historical Encyclopaedia, Perabo genealogy was retraced starting from its forefather Ambrogio, who lived in the early XIV century.

Such information comes forth out of the register of a notarized deed written by Giovannino Lozza, a Milanese notary. On July 27, 1375, he recorded that Giovannolo Perabo, known as Zolo, son of Ambrogio, expressed his will to institute a chaplaincy in the collegiate church of San Vittore in Varese under the aegis of Saint Maria La Longa. 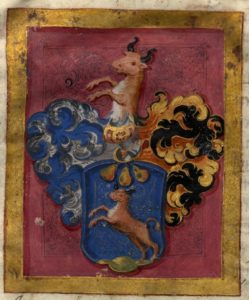 Such a patronage was then kept up by the descendants, and it lasted until mid XIX century, when the remaining branch of the Perabos’ in Varese became extinct, following the death of Don Pasquale.

The Perabo residential compound is located in the centre of Varese in Via Albuzzi, Via Griffi, Vicolo Perabo and Piazza Giovine Italia.